A word on Baguio City 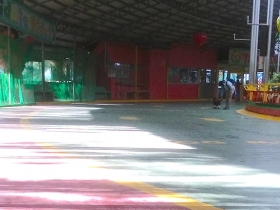 Baguio is really one of my favourite places in the Philippines.  I think that's because the city has a lot of the aspects of daily life that I like in Europe.  There's the park with the daily activities that are hugely popular; the high number of good quality places to eat; little outdoors cafes dotted around that you can sit outside and relax; and then the park again, it deserves another mention: it is the central hub of daily life and socialising.  Oh, and I should not forget the more sociable temperature, although I would quite like the hotel rooms to have underfloor heating so my feet don't blister every time I stand up.  No, it's not that bad.  I am exaggerating, but I have experienced blistered feet due to the cold when I was in China many years ago, and no, Baguio wasn't THAT cold!

After ten years of being in Philippines I finally discovered the skating rink in Baguio.  Well, I was told about it so I cannot claim credit for the discovery.  It's not as though it was hidden deep in the jungle up in the mountains and I discovered it a la Megallen.  No, someone told me.  So I went there to check it out.

Description of the skating rink at Baguio, Philippines

I think the prices are P50/hour if you have your own skates, or P80 per hour if you hire theirs.  I don't remember exactly, sorry.  There are no lockers.  These is a mini-shop offering drinks and stuff.

The rollerskating rink at Baguio is a circlular road that goes around a mini fairground.  The surface is concrete and has a painted finish.  The floor is uneven, bumpy, but the paint gives a super smooth finish and can therefore be a little bit slippery because of the paint, making it feel a bit more like a polished wooden rink.  This should not make it harder to skate, although you might need to adjust for your first few strides, it's a minimal and quite natural adjustment.  Watch out for spilled water on this surface though, as that will be super slippery.

The rink specificies traveling in an anti-clockwise direction and you're expected to be aware of pedestrians crossing into and out of the fairground at the middle at the crossing points.  Frankly, anybody who can skate fast enough to be a danger should also be experienced enough for this to be no issue at all.

The major, major plus point of the rink is that they have a huge collection of quad skates for hire and the skates are really good quality.  The boots are made from leather and absolutely perfectly made.  I was told that the shoe maker died so they can no longer replace their skates and they are not for sale.  Booo! :(  I did ask if we can dig him up but was told that this is not allowed (bawal).  The plates are the same as mine (Sure Grip Super-X), trucks are decent and wheels spin freely and are of consistently good quality.  You should check the bolts yourself and loosen trucks accordingly or ask the staff to do it for you - I found one with a loose nut holding the plate on.  They also rent out inline roller blades and have a huge stock, but I did not look at them close up so I cannot comment on their quality.

The rink had a handful of other people, enough to say "hi" to when passing but not really enough to enjoy skating with lots of new people.  However, I was there only during the weekdays in the early and late afternoon.  The staff told me that it really comes alive on Saturdays and Sundays and apparently there are other customers around on those days who offer coaching, presumably for a private fee.

Skating around Baguio in general

Baguio is a great place to skate if you love hills and love actually skating across a city, exploring new areas and overcoming all obstacles that you might come across.  Pavements are fairly wide and decently made.  Most roads have at least one pavement that are what I consider to be skateable.  This means you can hop into and out of the road based on how comfortable you are with traffic.  Burnham Park also has four 'roads' that you can skate along at any time, mixing in with the cyclists and other wheeled-activists :)

I cannot express enough how hilly the city is.  This might be a given to anybody who knows anything about Baguio, but really, asides from Burnham Park itself the city is up and down and up and down.  It's the rollercoaster track for skaters.  It's great fun if that's your thing.

Bit of context to my skating experience

I happened to begin my skating life at Rollerworld skating rink in Colchester, UK.  It is said to have the best skating surface in Europe.  The floor is really amazing, and for the most part so was the community.  It was a thriving skating hub with full disco and restaurant and arcade games, Quasar laser gun games etc etc.  Eventually I was encouraged to skate outside and that's when skating began to really change my life.  Once you've been set free on the wider world it is really hard to go back to being excited about skating around in circles again, even on the continent's best surface with great people all around you.  I am a fairly experienced street skater and really enjoy skating across cities, that is the most fun way to enjoy skating for me.  Yes, I can enjoy hanging out in one place, skating parks and rinks every now and again (IF it's with good people), but it's not really the thing that drives me to skate (anymore).  Please bear that in mind as I give my review....

Should YOU go and rollerskate at the rink at Burnham Park?

- live in Baguio and have never tried skating before: you should absolutely go along.  Go there, hire some skates and have a go at skating, preferably with friends and family, and have a fun day out.

- live fairly near Baguio and are curious about skating: go along and hire some skates and see if you like it.  Again, try to go with other people to make it more fun.

- live anywhere :) and have experience of skating: then I am not sure that the rink is a big enough draw to bring you into the city.  It's a circular road and can quickly become boring, especially without many other people to interact with.  If you do go, go at weekends and/or go with the intention of skating around outside too OR go with a group of friends and have fun doing something a bit different.  And do explore Baguio, it's anyway a good place to visit.

I like the rink, I love their range of hire skates, but if I lived in Baguio I might go once every few weeks on a weekend just to make new friends.  Asides from that I like Baguio City for skating, there is so much to do, it fits really with my style of cruising around and exploring.  I suspect one month of skating three or four times per week would be enough for me to run out of new places to skate, but I haven't yet done that so for me it remains an attractive city to skate in.  The fact the rink exists is a very good thing, I wish I had known about it years ago when I used to go to Baguio a lot more often.