I was very interested to see some people taking offence to Dan Brown's latest book, Inferno.

The problems seem to be that in the fictional story, Inferno, Dan Brown compares passing through Manila to passing through the gates of Hell.  This sparked some kind of outrage among some of the Philippines religious leaders, especially Fr. Francis Lucas. 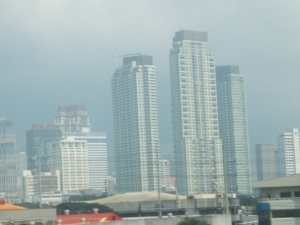 The first thing to look at is whether or not it is a fair comparison.  If you search on many of the most popular travel advice websites, you will discover that most travelers avoid Manila at all costs when going to the Philippines.  It appears that the general concensus is that it does not have much to offer to the traveler compared with other capital cities and is extremely stressful to pass through for the reasons mentioned in Dan Brown's book.  Then ask the residents what they think of their capital city and you will find that a lot of people speak negatively about it, both the Filipinos who live in Manila and guests from overseas.

The most tragic thing about Manila is the traffic.  I am often asked "Do you have traffic in your home country, Sir?"  I always reply, "Yes, but our traffic occasionally moves."  This is always met with laughter by locals.  The traffic in Manila is horrendous.  Brown also makes references to seeing the suffering of the many homeless and the polluton.  In Malate, it is not uncommon to see people hobbling around on one leg, children without clothes and kids sniffing glue or playing with dead rats for amusement.  So, is it reasonable that a character in a story might compare passing through Manila to passing through the Gates of Hell?  I think it's not beyond the limits of imagination that somebody might feel that way.

Next, let us look at Fr. Francis Lucas's reaction.  This is a man who preaches Christianity and the tales of the good Lord Jesus, yet his reaction was one of damaged pride and ego.  He seemed to take personal offence to the comments in Dan Brown's work of fiction and reacted aggressively by attacking Dan Brown's personality, his career and even the Middle East, when he said:

“Maybe Brown may want to go [to the Middle East] and see for himself that the life of a person has no value, that fellow human beings are not treated with respect."

Fr. Francis Lucas obviously believes that it is not right to criticise the problems of Manila in a fictional story, but it is entirely ok to publicly slate an arabian state.

Apparently they were so worried in Manila that the book may give a negative view of Manila that Francis Tolentino, of the Metro Manila Development Authority wrote to Brown to ask him to "rectify his portrayal of Manila."  That seems a little hypocritical to me, especially for anybody who has read any newspapers, magazines or watched TV in Manila.  I was in the audience at a very popular TV show at GMA where a foreigner was spotted in the audience and taken onto stage to be humiliated in Tagalog, a language he did not understand.  There are constant jokes and mistruths about foreign countries and the news channels in Manila seem to scour the world for examples of any negative comments about Philippines which are then taken out of context and reported as an insult against the country, where often that is not the case.  There are some very-well celebrated local Filipino comedians who spread jokes that foreigners do not wash, do not dress appropriately and base comedy around other stereotypes that were invented in the Philippines  So, why are so many people about a fictional story that most people agree largely represents the truth? 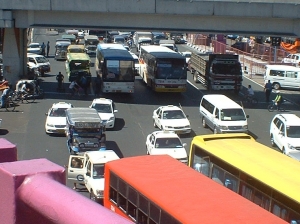 Fr. Francis Lucas also referred to the book Da Vinci Code and therefore attempting to question the morals of Dan Brown.  Da Vinci Code is a book that was very largely based on very real research that the Catholic Church happens not to approve of very much.  I have read the book it was based on.  The authors of that book attempted to take Brown to court because of his extensive use of their research.  However, he altered key parts of it to make the fiction work as a story and was very open about it.  What he certainly did achieve is to show that the bible and other religious documents have so many contradictions and inconsistencies in them that they cannot be taken as 100% "Gospel".

Which leads me to a very important point made by Fr. Francis Lucas against Mr Brown.

“You’re so rich by fooling people around. And that is very real.”  Dan Brown is not fooling anybody.  His books claim to be fiction and they are fiction.  If he had written a documentary that was fictitious, now that would be fooling people.

i have four questions that I would like to ask.

1. How can an organisation that claims to be following the teachings of a humble, poor, carpenter from Juraselum, possibly be so immensely disgustingly rich?
2. How can a priest who lives in Manila drive around in a big expensive car and live in a very comfortable home and allow his congregation to donate to the church and go 'home' to live in the gutter?
If a country bans every piece of art that criticises an aspect of that country and is unable to admit its own shortcomings...
3. how can it possibly learn and improve and rediscover its value when it was once dubbed The Pearl of the Orient?
4. how many Filipino celebrities, comedians, OFWs or works of art would be banned in other countries?

I would like to thank Fr. Francis Lucas for bringing my attention to Inferno.  I had not read Da Vinci Code and don't really intend to, it's not for me.  I have read Angels and Demons and found it a fascinating book that was obviously well-researched and now I will buy and read Inferno, a book that I was not aware of until I saw it all over the news in Manila.

Finally, let me close by saying that I spend most of my time in Manlia through choice.  There are many great places to spend time and the vast majority of people that I have met here are wonderful human beings.  I am very happy to be here.

BUT, when a man dies and his spirit rises, I sincerely hope he does not have to pass through Manila on his way to the Pearly Gates.

Thank you very much for taking the time to post a comment. I absolutely agree that an organisation that wishes to help must first become strong in order to be able to help the weak. Unfortunately, the most commercial of today's religions focuses on taking money from the poor and keeping it for themselves, while my guitar gently weeps...

On your question-1: My basic logic dictates that one has to be rich to help the poor financially. Also one can only be rich, considering the person isn't born rich, by getting money (which can also be termed as earning) from the people around. If I paraphrase the last sentence it would mean that an organization who intends to help the poor need to first become rich by the poor's money. Kalyug (the era ongoing) is the period when mankind would be the most unfair ever ,although this would be preceded by Ghor Kalyug (which is extreme Kalyug), it would be foolish to imagine the aforementioned organization would be successful in creating balance on this planet. Only those organizations, religious or business, who has strong balance sheet would prevail. Of these two, business organizations has the power to improve people's life but creates disparity and possessing minimum becomes insufficient, resulting in unhappiness. Social organization which so far have only come out wearing the costume of religion has the power to redefine minimum that can become sufficient and contain unhappiness. And then we will watch for the hourglass to flip the sand in itself till then lets play guitar