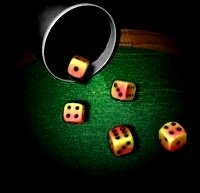 Yes, of course it is, it is a dice game.  But, it is not purely a game of luck, there is also skill and method to the gameplay.  If you have a good player and a bad player, the good player will tend to have a far higher average score after 100 or so games.  A poor player will generally score less with the same dice rolls as a good player.

The separation is in the decision making.

Of course, there are some decisions that are easier than others, but there are times when clever decision making can really make a difference over the course of a game.

Imagine a position where a player has scored 59 on the left hand side with only ones and twos left open, has already placed a zero in yahtzee and has 3kind, 4kind, full house and low straight open and rolls 11223.  What to hold?

Some people would hold the 2s, others would hold 1,2,3.  I would hold 1122 on the basis that the 2s would give me my bonus and leave me the ones available as a dump space for later, and I might convert it into a full house.  This decision in effect would give me an extra turn to attempt to score more points in a more difficult position later on, such as the low straight.

There are also many occasions when a wrong choice can lead to a slot being filled earlier than it perhaps should have been, which affects the rest of the game.  This can affect how many attempts a player has to target getting a yahtzee or even whether a player hits the bonus and the straights too and can make a huge difference in the game.

So, I would say that yahtzee is not just a game of luck, but also not really a game of skill either.  It is somewhere in the middle.

I like to think of yahtzee, therefore, as a game of luck management.

The website http://www.freethedice.com has an online community built around playing yahtzee.  There are daily tournaments, an open chat room, single and multiplayer games and many variations on the rules such as painted, triple, regular, sequence and a lot of other player-created rules.  The site is in itself free to play, but it is possible to pay to upload your own special images onto your dice.

The Greatest Salesman in the World