Mystery of the Missing Socks Solved! Oh, wait a minute...

There are lots of things that are peculiar about foreign countries.  I suppose that is what the word "foreign" means, isn't it?  Peculiar, alien, different.  One very different aspect of living in the Philippines is the incredible price of electricity, which rates among the highest prices in the world and that is without factoring-in comparative cost of living!  A study of highest cost of electricity by country was conducted throughout 44 asian countries.  It showed that Philippines is in the top ten!  Her neighbours Thailand, Malaysia and Indonesia are way down in the bottom six. 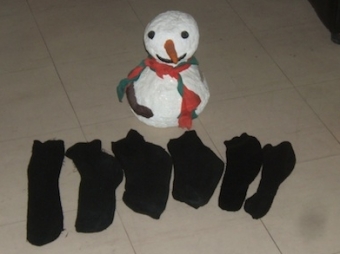 The cost of electricity is so high that even running a washing machine becomes unbearably expensive.  It is actually cheaper to hire somebody to manually wash the clothes instead and to allow the washing machine to become a high-rise table, so as not to waste it.  A manual washing machine (a real life person) also has other advantages.  Typically, it can provide much better entertainment than a traditional washing machine, whose conversation can become monotonous, always telling the same old jokes and constantly groaning.  And if you're really lucky, the human version might even end up being a really great cook too!  3-in-one - kape na tayo!

Happily, I found a very honest and hard working lady who agreed to wash my clothes for me and I was expecting that this would resolve the mystery that has dumbfounded every man throughout history: right back to the time just after Adam and Eve, when ape-man first invented socks.

Or do mothers, sisters, wives and girlfriends all over the world get a bit peckish and sneakily snack on socks when our backs are turned?

After three years of experimentation, I have gathered enough data to provide the answer.  If my socks are perfectly intact, then we know it must be the washing machine.  You will be truly amazed to learn that even with a manual washing machine, my socks still go missing!  How is that possible???

Studies suggest that it is actually a trick of the brain, that we believe socks go missing because we are somehow too stupid to remember each sock's size, colour (and presumably name) and that they return from the laundry basket at different times, confusing us.  Why the delay?  Perhaps they stop off on the way home to play footsies or get stuck in traffic or maybe they become trapped in a wormhole that exists only in laundry baskets and only attracts socks. 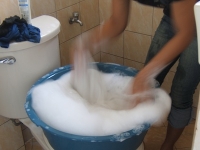 Well, I am not one of those idiots cited in the study.  I know and love every one of socks intimately and to prove it I cut them all up and used them as filler in the papier mache snowman pictured above.  I replaced them with ten pairs of not-so-shiny new matte black socks.  Identi-socks!  Their little escapades on the way home won't affect me now!  See, I am a genius!  Unfortunately, the socks I bought at the market that were clearly labelled "one size fits all" had some words missing.  The label should have continued: "provided you want the sock to not quite reach the knuckle of your ankle".  They were all so tiny that none of them even completely covered my heel.  I have since been told that this is "da' fashion".  Bah!  I therefore bought many new pairs of proper sized socks and gave the tiny ones away.  To my girlfriend.  Who then decided to practically move in with me and mixed them in with my longer black socks.

Now, it is pretty obvious that little black socks and longer black socks look quite similar and eventually become mixed up and confused, that is to be expected.  What I did not expect is that the total number of socks would continue to decrease and that those remaining would change size, leaving me with an odd number of different sized socks!  How???

What on Earth is going on?

It is even more peculiar than the cost of electricity, but I have now finally worked it out.  It is clear that the culprit; the sock-napper who commits such heidus crimes as stealing socks, cannot possibly be the humble washing machine.  Oh no.  And honestly, I do not have the guts to blame the "innocent" lady who washes my clothes either.  I did try.  Once.  Never again.  No.

I think we are left with no real choice but to conclude that if it neither human nor machine, it must be a supernatural cause: the duende.  Not the red duende or the white duende, but the neon blue duende who amuses himself by stealing socks and hiding them under the house.

Check under your house; I bet that you will find all of your socks there, looped together in a daisy chain, surrounding a small pile of five peso coins and other shiny items that had long since disappeared from your home.

I have to wear socks because the ants have also been eating the skin on my toes and the socks make up the distance so that my shoes fit me.

Why do you wear socks in this climate? I haven't worn socks for ten years but they still disappear from the wardrobe so it's not the washing machine eating them. It's probably termites.

How do you "shoot that socks" to your hamper? :)