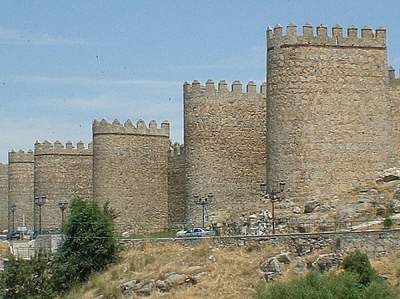 I visited a small city named Avila in Spain during a two-week road-trip around the North of Spain.  A small town of medieval feel, surrounded by castle walls, Avila, Spain is a beautiful little town.  The heat of the Spanish Summer sun was barely bearable and so I stopped to have a rest and saw a lady sitting cross-legged on the floor selling hand-made "postales" (post-cards) for EUR 1.50 each.

I would find it difficult to describe each post-card as a work of art.  She was using thick wax crayons and water-based paints, and had a stock of graph paper and thick cardboard, which looked like it had been gathered from nearby garbage bins, possibly tearing up storage boxes into strips.

First, she would paint a white background onto the graph paper to give her a clean starting point, and then she would paint her designs which were not of particularly high quality as far as art goes.  Each design was then stuck onto a small strip of cardboard.  Job done.

"I do this to travel" she said, and continued to explain how she and her boyfriend have been traveling from Poland and how the Polish are mostly ignored in Spain, unlike other nationalities.  She had been traveling for a few weeks and every day she would draw new post cards and sell them to earn her fare to another town.  I caught a glimpse of her design book as she was flicking through it.

She let me look through at her designs and then her eyes suddenly lit up.

"Let me show you something."  She flicked to the back of the book.

"These are children's drawings," she explained.  The first was of a large empty field with trees and a big sunny sun in the corner.  Others had horses in open fields and one had a snowman.  "I ask children to draw for me," she said, "I draw for them and they draw for me.  This one," she said with a gleam as she flicked to a picture of another field with trees and birds and some speckles and a snowman, "was drawn by a little black boy who was from somewhere very hot and had never seen snow before, so he drew what he dreamt of.  All these children, they all drew their dreams, whether they are of yellow skin, white, black, all children have the same dreams."  She seemed sad and happy at the same time.

Whilst describing her pictures she had remembered every child's name (which was written on the drawing in any case), and she gave a full description of what each child had been like.  She remembered them all.  "I have a dream," she said suddenly, "one day, I want to make a gallery in Poland and show all of these pictures drawn by children, and show that everybody is the same no matter where they are from".  She smiled.


It is now nine years later and Poland has just hosted the 2012 European Football Championships amid accusations of being a very racist country.  I wonder whether Asia has built her gallery yet and if she has, how much of an influence this has over the country as history continues to shape itself.

We had so much fun in Spain that time!