Your Name Says A Lot About You

It started back in May, 2010, when I was living with my flatmate in France.  He kept pushing me to create a Facebook account, but I just could not bring myself to do it.  He had just returned from a trip to Spain and had published his photos online.  I was advised to create an account on Facebook if I wanted to see his holiday snaps and that horrified me.  Had we, as a people, really degenerated so far that we could not pass a bunch of photos around the room?  Apparently yes, we had.  Each person would have to view them on their own computer instead.  Happily, that period of advancement did not last long; i-pads have since come to our rescue!  These days we are back to handing our photographs around the room again, albeit minus the danger of fingerprints and coffee stains.

Anyway, fast forward a couple of months to July 2010 and jump over to technologically-advanced Manila, the mobile phone capital of the world.  It is an amazing place, even the homeless are tech-savvy, totally 'up on' the latest gadgets.  Everybody has the latest model of their chosen device, whether it is an iphone, ipod, smart phone or whatever else is considered a necessity above food and drink these days.  I was in Manila and having a great time but I was also traveling alone and keen to stay in touch with new contacts.  So, I did it, I finally relented.  I finally gave in and created a Facebook account. 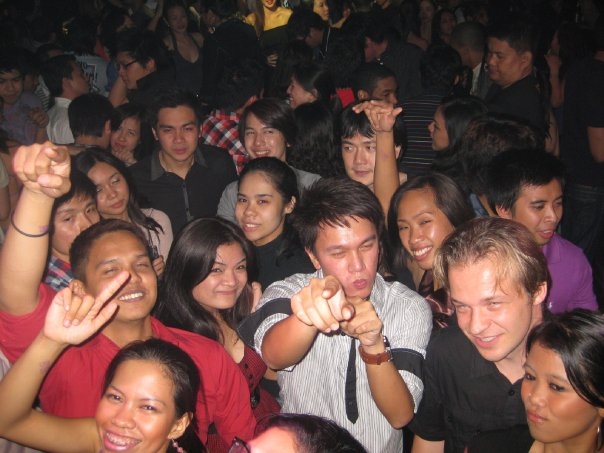 It should be simple, shouldn't it?  Fill out your name and off you go, but nothing is ever that simple in my world.  I was reluctant to use my birth-certificate name as I have never really enjoyed making life easier for stalkers.  It was a tough decision, but finally I decided to use the alias 'Sandy' as my name.  Problem solved.  But then, something happened that would prove to be a pivotal moment...

"Family name?  Really, you need that?  Ok, but you're only getting the first letter, ok?  Is that a deal?"

My computer said nothing, but I pressed the letter T anyway and the computer wasn't happy.  Facebook seems to discriminate against people who have only one letter as a family name.  I needed to have at least two, so I hit another key and forgot all about it.

I had a great Summer in Manila, partying all over Quezon City, Taguig, Makati and Manila, out almost every night.  I met so many fun and crazy people whose names I will never, ever remember.  This alone betrays me as a foreigner, asides from the blonde hair, bleached-white skin and big honker of course.  Filipinos remember the names of everybody, forever, without exception.  I know of one 29-year-old Filipino who instantly knew the names of an entire family he had only met once previously, thirty years before when he was still just a thought swimming around in the bottom of his father's bottle of San Miguel Pilsen.  As well as drinking a lot that Summer, I also appeared in hundreds of photographs!  I admit it, not all of them were by invitation.  Some were stolen shots, others photo-bombs and some were photoshopped, but that was definitely my face in them all.  Yes, ny face was there, but nobody ever tagged me.  Nobody added me as a friend either.  In fact, throughout the whole Summer of 2010 nobody added me at all.

What had I done wrong?  Had I slipped-up culturally again?  I had tried to do things right.  I had used 'po' in all the right places; kept smiling even when frustrated; I shook hands more lightly and for longer than I would have normally; wore jeans in the mall; showered several times per day and even applied tawas to my sweaty armpits.  I had done everything right, so what was going on?  I was determined to find out.

At the next major party I saw one of the girls I had photo-bombed last time out.

"Hoi!  Why didn't you add me like you promised?"
"Kasi bastos ka!  You're bad!"
"Why?"
"Bastos ka!"  And that was that.  She was gone.  She may or may not have been right about me being bastos but how could she possibly have known, we had barely spoken!  I felt that she had been a little unfair so I tried a different approach with somebody else I recognised.

So, there you go, I learned the hard way that naming yourself in a foreign language can leave you somewhat culturally exposed.

Back at the drawing board I had to choose another name, carefully.  As many of my Filipino friends called me pasaway, baliw, gago, muret, ulol, matigas ulo (variants of Tagalog for 'crazy') I should use one of those.  Now, I knew that most of those probably should not be used with new acquaintances, but pasaway had a funny ring to it and has a suitably daft follow-up too.  Pasaway? Hindi po, pasa-load lang.

So, that became my new name.  I thereby re-christened myself Sandy Pasaway and it was great.  I was finally able to have my face tagged and added loads of new social media friends and kept my silly pasa-load joke.  It was really fun for about a month and then, out of the blue, I began to receive some bizarre emails from England.  Here is one of them:

"Oh My God!  I don't believe it!  What happened to Sandy?  When did it happen?  He passed away?  That's terrible news!"

How I transfer money to Philippines