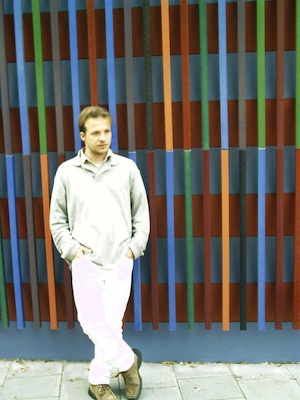 Hi there. I am Sandy, author of WhiteAlien.com. That's me over there to the right, leaning on a wall outside a museum in Munich.

As the website is mostly about my views of the world and such, I felt I ought to write a little bit about who I am to give a context to my experiences and rants.

I grew up in Britain's "Oldest Recorded Town": Colchester. My parents separated when I was four or five years old and so I spent my life living with my mum and elder sister, and later, with more additions, two brothers. We lived at one time with my aunt, another time we "squatted" for one year and later lived in governmental accommodation (council estates) and by the time I was twelve years old, I had lived in seven different homes for a year or more each and had collected three half-brothers and a half-sister.

I suppose that the need to keep up with a constantly changing environment has been a prominent feature of my life.

At school I always did ok, never excelled. I was "very intelligent but lazy." When you are told something often enough you begin to believe it. It took me nearly thirty years to realise that it is not true at all. "I am not lazy. I just do not like doing things that I do not like to do."

My ideas of life and how life and relationships were very vivid and strong even from an age of twelve and I was mostly ridiculed for my views and certainly seemed to be alone in them, even to the extent of being punished at school for my methods of budgeting a fictitious salary.

I have always had friends but never felt the desire to belong to any one clearly defined social group but always been able to adjust without becoming overly dependent on my own social role within a fixed group.

After school, I worked in few shops including a toy shop and charity shop, two of my favourite jobs. Later, I did many jobs for various office agencies and also worked for Jobserve at one time. I found it hard to find work as I did not have proper qualifications and was "over-qualified" for simpler jobs. I spent some time as a volunteer helping mostly uneducated people finding work and helping them to compose their CVs/resumes and had a deal of success in helping them, whilst I myself remained unemployable.

I did finally get an opportunity working as a website designer but did not have the knowledge, skills, or a computer to work with. I was bought a book on HTML and borrowed other books. I paid a small fee to register at a college as an external student and thus had access to their facilities and built the first website there at the college. I used the money to buy a computer and more books. That's how I started out.

I worked for three years as an IT tutor in an adults college before moving to France to start a new life at the age of 23. I did not speak French having refused to go to classes at school due to having no desire to ever be outside of the UK. I lived in France for just four years before moving on and now, aged 31, am living here in the interesting city of Manila in the Philippines.

Hopefully there will be many more years to come. Watch this space!