I come to the end of my very brief two day trip in Bangkok and feel that even in this short time I have had a strong taste of the city. 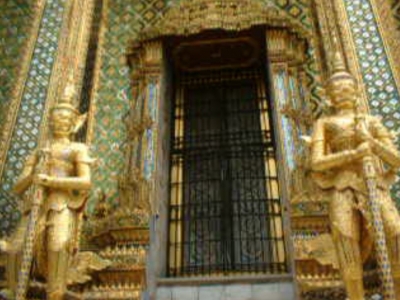 y first impression of Bangkok was that the people are good with tourism.  Mostly honest, explaining everything perfectly: fares, transport, tourist attractions, being very helpful, friendly, and mostly appearing to very much be interested in your 'story', asking details etc.   Last night I asked the receptionist in the hotel if I could have a meal at around 11pm, so he sent the bellboy out on his motorbike to find exactly what I had asked for.  When he delivered the food to my room, he practically ran away, thus making it difficult to get his attention for a tip, and appeared very grateful at my pitiful offering.  This, in stark contrast to Philippines where they mostly sulk in annoyance when you ask for simple things, such as a free street-map or attractions brochures, or bus timetables, travel advice etc.  It was a pleasant surprise to be treated like an intelligent human.  Another massive contrast from my experiences in Manila is that in Bangkok, nobody really noticed me.  To go from permanent celebrity status in Philippines, to being completely unnoticed in Bangkok, is quite unerring.

I walked yesterday from National Stadium to the Palace, thinking it was only a short distance according to my map that turned out to be pathetically improperly proportioned.  I arrived after closing time.  I then decided to try out the infamous soap massage and after visiting three Turkish Bath Houses, decided on one.  It was not really what I had expected: slightly disappointing.

Along the way, I met a crazy Japanese guy who was very funny, a bit queer and excellent company.  I have been six months learning to walk at asian speed and thus almost had to sprint in order to keep up with him.  He showed me how to buy food at the food court.  They use a voucher system so that you must first buy vouchers and then use these to buy your food: it is a most bizarre thing, but I see the benefits of it.  He also spoke Tagalog so we had fun with that.  Actually, we were chatting in Tagalog on the metro-rail system, much to the bemusement of a group of Filipina who were staring wide-eyed at us!  I then checked out Soi 4 and some other places and again, compared to the Philippines, the attitude of the people was largely disappointing.

I don't speak Thai, their English is pretty poor (enough that one manager took offense as she did not hear me correctly and believed that I was swearing at her haha), and generally not really good service.  So I had an oil massage, which was better, and then went to sleep.  Incidentally, the best massage that I have ever had was at Chinatown in Kuala Lumpur.  The girl was crawling all over my back, giving me a severe pounding, yet somehow it felt extremely relaxing and not at all uncomfortable and afterwards, felt incredibly rejuvenated.  If ever you're there...

Today, I took a taxi to Grand Palace and the driver was excellent, giving superb information about how to save some cents and how to find different places.  I had explained to him how I had wasted the day before trying to walk to the Grand Palace and that I really wanted to see it today, as it would be my last day.

After I left the taxi a man advised me to go to the entrance behind me to buy a ticket.  At the door two men (one looked like a guard) advised that the palace would be closed until 3pm because of some Special Service.  Funny, it normally closes at 3.30pm.  I questioned that.
"What time are you opened tomorrow?"
"All day, Sir, normally, but today we are open from 3pm until 6pm. Tomorrow, open all day"
"How about 4pm tomorrow? Closed? Open?"
"Open Sir, all day tomorrow"
Didn't seem right.  Anyway, they went on to explain to go somewhere else to go, a Golden Buddha, so I asked walking directions to the place, and then the conversation carried-on and I forgot myself for a minute or two.  They approached some others too and gave a similar story.  As the story completed, they summoned a passing tuk-tuk and then boarded it and drove off.  I actually believed their story and decided to walk along a main road to make a decision about what to do next.

Ahead of me, a car was approaching with the lights flashing and the window wound down and the driver was shouting at me, pointing back to the temple.  He was moving quite quickly but I remember his face, he looked a bit panicked: desperate.

It was my taxi driver.  He was shouting at me to return to the palace, he must have been saying "go there, go there!"

OK, now I get it.  Bangkok scammers are expert liars (disclaimer: only those who want to, obviously).  Filipinos can lie a lot too (same like every people), but they are not really used to tourists and therefore aren't very good at their scams.  I have a feeling from the Philippines that even the scammers and hold-uppers are somehow kind and do not really know how to tell a lie effectively.

I started to remember a story from a friend a few years ago.  He told of a scam in Bangkok that he had been caught-up in; a hugely-structured set-up that involved people planted in different places all over the city.  I resolved to go back to the Palace.  The "guards" had disappeared and the main entrance was entirely open.  I had a great time.  Thank you Mr Driver!

On the way to the reclining Buddha (which is absolutely HUUUGE), I met some Filipinos and then heard a guy telling a group of American girls that the Buddha was closed for a special ceremony so they should go somewhere else instead.  I advised them not to be fooled so easily and then got a taxi back to my hotel.  Sadly, I entirely forgot to visit the temple I wanted to go to, which is stupid.  Something for next time I guess!

The Balloon Blower: "Truth doesn't matter when you're telling a good story"

Seems like in Thailand tourists are treated equal, unlike in the Philippines.