Sungka Flies To Russia With Love 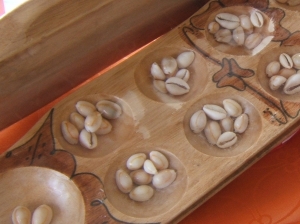 A few days ago I received an order for a Sungka board.  There is nothing unusual about that in itself.  This order is interesting because it came from a man living in Moscow, of the Russian Federation and this raises some interesting questions.

Is Sungka a prominent game in Russia?  Do Russians generally play Sungka?

So what can be the explanation?

The client may well be a Filipino who has moved to Russia and misses his homeland.  This can almost certainly be ruled out, unless he has changed his first name, his family name and learned to write in Russian and forgotten how to write in either Tagalog or English.  So then, perhaps a Russian man has married a Filipina and she misses her homeland.  Or perhaps our Russian friend has Filipino friends who have asked him to help them buy a Sungka.  Or perhaps our man has recently traveled home from Boracay and heard about this mysterious game during his travels and would quite like to find out more about it.  Perhaps.

Or perhaps, in my crazy little mind, the explanation is a little more romantic.

Imagine if you will, a cold, blistery, wintery day in the snow-laden streets of Moscow on the first day of January, 2014.  A filipina is alone in the street, crouching over a bucket of icy water, scrubbing a small cloth between clenched fingers that have turned red from the cold.  She is dressed like an eskimo.  Her large, puffy coat smothers all four-feet-flat of her short, slender body.  An entire llama's fleece is wrapped snuggly around her neck, half smothered by the thick, black, woolen hat that flops over the top of her head.  Between the scarf and hat there is only just enough space for her stump of a nose to protrode at the front and her long, black, silky hair to escape at the rear and flow down her back.  She wears thick leggings to protect her legs and her feet are entirely visible, barely protected at all by the flimsy rubber of her flip flops from back home.  She gasps.  Her breath quickly evaporates; the only warmth evident in the frosty air.  She smiles.  The breath is not just a special effects Hollywood trick as she had once thought.

And now HE is approaching.  Yet again.  Here he comes, the bulky young man living next door.  He has the knack of appearing just when she is already feeling at her most sombre. 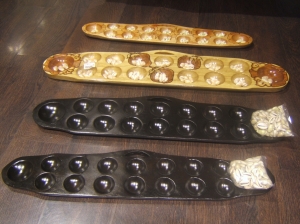 His warm, vodka breath melts the ice around her as he approaches, his rough approach as blunderous as a tank thundering through a field of buttercups.  He stands in front of her.  He demands something.  Is it a greeting?  Is he asking what is she doing?  She doesn't answer.  How can she?  She tips her head and raises her eyebrows.  He is anyway commanding in Russian and she does not understand a word.  She trembles in the cold.  He demands something else.  They spoke together once.  She had tried to talk about her childhood but he didn't understand anything anyway. It was a waste of time.  She had not been able to explain herself well enough, so she had given up.  She frowns.  He stomps off into his house.  He manages to enter the home without breaking stride.  Somehow the door opens and closes behind him as if following his every wish and desire.  She trembles again.  Just a few more garments to go and then she can go inside and send a message to her mother back in Manila.  She hopes her fingers will remember how to operate her phone.

Inside his house, our friendly Russian is in love.  He is crazy about the girl.  He loves her little button nose; her shiny, thick, black hair.  He loves her softness, tenderness.  She must have a hard life but she never seems to complain.  Why does she always seem to move away from him?  Is he so ugly?  Is she just scared of him?  Why?  He tries to be so gentle to her.  She never replies to him.  She just dismisses him nonchantly with her eyes.  Is he not even worth a single word?  Some kind of grunt or utterence?  Actually, he ponders, she did talk to him.  Once.  She was explaining about a game that she used to play back home, but she spoke so quickly with all those fast syllables.  He tried to understand but she seemed to be impatient with him.  Why didn't she try to speak English?  They speak good English in her country, don't they?  Where was she from again?  Philippines, right?  Yes, Philippines.  She was trying to show him the game with the stones and the holes.  Yes, of course, that's it!  Seven holes?  Now, what was it called?  Oooh, it was a long time ago.

Google is his friend.  And Paypal.

Within minutes, a Sungka is on its way to Russia.  Our young Russian gentleman has a plan.  He will present a beautiful hand-carved wooden sungkahan to the girl of his dreams.  He will help her to be happy in his country and to show her that he likes her and is intrigued by her culture.  She will see that he cares.  Maybe that could be the way to break through their communication barrier.  They could play Sungka together!  You never know, she might fall in love with our handsome young Russian.

And to be honest, I really, really hope that his plan works.  Not just because I like happy endings but also because i don't offer refunds and do not accept return of unwanted goods.

Find out more about the game, Sungka, and where to buy it at: http://www.sungka-game.com

"Everyday, I’m loving you more and more. Listen to my heart can you hear it sing." Come what May.

She miss him so much! She feels sad of his absence.

We managed to sell yet another Sungka today!

Beautiful sungka sets. I used to play sungka with my cousins before, back when all we cared about was to play and play. But we were using small stones and dig holes on the ground.

Haha ...!!! Very romantic idea, indeed.. Very nice descriptions. I said, wow! I would fall in love to that Russian guy, how sweet!
But the last part really worth to laugh. ..a lot!
:)