I went for a relaxing walk with a close friend through Ayala Triangle Park on Sunday night.  The fresh, early evening breeze was soothing and gave some respite from the immense Manila heat of late.  Having had a fairly successful day of avoiding the usual irritating street vendors, I felt that I was finally about to be caught out during my walk.  Ahead of us were two girls and a boy holding sunflowers and staring straight us.  It was my first time to see a sunflower vendor so I knew that something was a bit odd.  Expecting the usual spiel about college fees and donations (a bog-standard introduction to a scam), I listened lazily to their introduction. 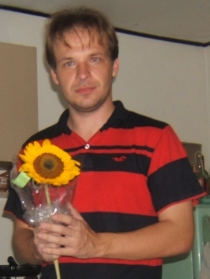 The boy spoke, quickly, seemingly trying to get his words out it before I walked away.  His English was spoken with a Chinese flavour.  That's when I noticed that they all looked to be of Chinese origin.  Chinese sunflower street-vendors?  In Makati?  Seriously?  Why?

"We're trying to raise awareness...." he stammered.  "Erm, in our own country....in Taiwan...the government... the authorities are taking away our democracy."

He showed me a leaflet and started to read it.  I interrupted, "is there a petition to sign?"  No.  No petition.  "Are you asking people to share links or to donate or to contribute anything at all?"  No, not at all.  "Are you selling the sunflowers to raise funds?"  No.  He continued to explain as I read the leaflet.

They are citizens of Taiwan and are concerned that their voice, their right to democracy is being taken away.

The Taiwanese government has entered into a trade agreement with China that the people of Taiwan feel will cause them to lose jobs and their industry to cheap competition from China and may lead to the country eventually losing its independence.  Therefore, a lot of people in Taiwan entered into a peaceful protest.  Their protest resulted in  riot squads being called in for 'crowd control'.  The story is that the citizens were protesting peacefully, without causing any harm, noise or damage, and that the riot squads attacked the protestors.

"So, what is the sunflower for?" I asked.

"We are giving them away with our website address written here.  We are not asking for anything at all, we just want to make people aware of what is happening and to talk about it."  I later discovered that the sunflower has become the symbol that represents their peaceful protest.

"Our government is not taking into consideration the voice of the people and is not listening to our concerns, and are smothering our voice."

I like the way they shared their story so much that I wanted to pass it on.

Read the story of the Taiwanese students here.

I cannot verify if their story is correct or incorrect because I was not there and I do not trust media outlets of any kind due to my own personal experiences.  But, having read a few different reports and basing my ideas on the website link above and the way these youngsters conducted themselves, my gut feeling is that they are  honest about their intentions and about what has happened and of the possible consequences for the Taiwanese people.

Read their story for yourself, check the news reports from all sources, and then make up your own mind.

They reminded me of Dr. Jose P. Rizal. I hope their voice will be heard.