Fred is a poor man. He works planting rice, earning just a few pesos every day. When he is not working, he sits with his friends, family and neighbours at the roadside.  He counts jeepenys as they go past, musing that if only he had been more lucky; if only he had been born in another country or to richer parents,  his life would be so much better. 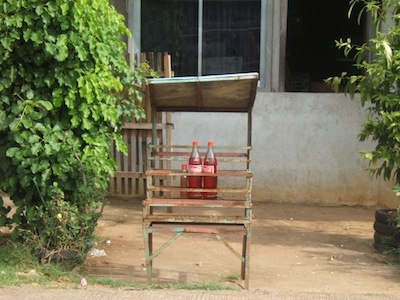 One day Fred is dreaming.  He dreams of having a bigger, stronger house.  He dreams of sending his children to a good school and of sometimes traveling to other cities or even other countries, why not?  Fred is determined to make his dream come true and decides to start a new business.

Fred's neighbours, friends and relatives do not have the same vision or ambitions as Fred. They all believe that none of them are 'lucky' enough to run a business. They are not lucky. They believe that Fred is also not really lucky. So they tell Fred that he is not lucky and criticise him.  They care about Fred and they want what is best for him.  They do not want to see him fail.

Their doubts start to get into Fred's head.  What if they are right? What if he cannot succeed? What about his wife and kids? His friends, family and neighbours will all laugh at him! Fred finally listens to them all, gives up and sits back down with the people who love him dearly and want the best for him. They continue counting jeepneys together until it's time to harvest the rice.

Meanwhile, in the next barangay, Pablo has been working on a plan to change his life too. His friends, family and neighbours also think that he is crazy. They also believe that they are not lucky people, including Pablo.  They believe that Pablo was not born lucky and cannot ever change his life. "Pablo, you will fail," they say. "We are not lucky people, we were born into this life and this is our destiny to sit here drinking tanduay and counting jeepneys."

But Pablo, is a little bit more 'crazy' than Fred and he listens to his close relatives but he knows something.  Maybe he really is lucky because his ears don't work quite as well as Fred's do. Or maybe he is more determined and a little bit more brave and tries anyway.

But he is also scared and concerned about what will happen if ever he fails. So, he makes a plan.

Pablo plans what to do in case he fails. He decides not to risk everything but he starts small with his business. I don't know what his business was, you'll have to ask Pablo himself, but he did it with a little thought and he started to have a few sales and did not risk very much. It grew slowly. Then it began. Even though he had some early success, Pablo's loved ones told him about their concerns.

"Pablo, what are you doing? Don't you see that it cannot last? Can't you see that your business will fail? You are not lucky, Pablo! Uh. Oo. It's up to you naman. You'll see." Pablo starts to wobble.

What if they are right? He already has had less time to spend with his family because he is working a bit harder than before.  He misses his friends and his neighbours and he misses sitting with them.  It would be a shame to waste all this time and effort and then to lose it all.  These are the people he loves and their opinion counts too.

It is hard for Pablo. He has had some success, but what if he fails? They will all laugh at him and tell him they told him so and he will be ashamed. Is he just wasting his time?

Then Pablo wakes up to reality. They won't laugh at him. They love him and there will always be a chair at the roadside waiting for him at the Counting Jeepneys Theatre. Yes, they would feel relieved if he fails because then they would know that they right not to try it themselves.

Pablo continues his work. He understands that if he wants to be more 'successful' than the people around him that he must, absolutely must, do something different to what they are doing. They won't understand him because he is a little bit different, but that's ok. It's HIS life and that's his choice and his risk to take. He cannot explain to them why he feels this way, because they will not understand: they have a different way of thinking. That's fine. He loves them anyway.

After some years, he returns to the province on vacation with his beautiful wife and confident children and shows his kids how he grew up. He teaches them to use tabo and to use cold showers and how fun it is to sit with the family and make jokes and tell kwento, kwento, to pick fresh fruit and drink buko juice. The kids are city kids now and they don't much enjoy the manual flush or the tabo (even though it's cleaner than using toilet tissue) but they like the freedom and the clean air and friendliness of the province. In ten years, nothing has much changed. There a few new faces and a few of the old faces are no longer there and lots of other faces look a little bit old and a little bit wiser.

Everybody is so happy to see Pablo and to hear his stories of where he has been and what he has done. Pablo stays for a week and then travels off. He misses his family but their time together is much more intense now and he enjoys it very much even though it's a shorter time.

Some weeks later, after the provincal fiesta, two groups of people from two neighbouring barangays are sitting at the roadside drinking tanduay and counting jeepneys. They are discussing the different fortunes of their relatives, Fred and Pablo.

"Pablo is so lucky," they say, "he was the lucky one. He was born lucky. Maybe he comes from space, like Kokey. I wish I could be like Pablo. But I am not lucky.  Fred is not lucky too!" They all laugh, even Fred laughs.

They all wish they were lucky too, like Pablo.

The truth is that they are all quite happy doing what they are doing because they are in the safety of like-minded people and they do not want to risk being laughed at or humiliated.

First Trip To Amsterdam: Part 1 of 3

Yes, of course, please do share this short story with anybody that you think might enjoy reading it or benefit from reading it.

I am very happy that you feel it might help somebody.

Just thinking this would be helpful for the secondary students to create a positive view of life or to always be optimistic. Can I share this to my teacher friends in the Philippines ?

Hi Judith, thank you for your comment. I am glad you enjoyed the story!

This is wonderful, really wonderful .genius story. It depicts two kinds of personality. I can relate s this much , I am the girl version of Pablo. Thanks for this.

Please note that although this story uses a setting of a province in Philippines, the attitudes shown by both Fred and Pablo can be found in all of us, all over the world.